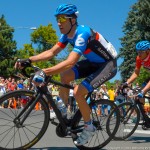 I am not a sports photographer, but when an international-level event comes down my street, I break out the cameras and walk the 25 steps necessary to make some images. Last Saturday, Stage 6 of the USA Pro Cycling Challenge raced around the corner nearest my house. (See the photos below.)I’ve never cared to photograph professional sports because, lacking press or event credentials, I could not get close enough to the action to make the kind of photographs that revealed the drama of competition. But, cycling is different. I could set up my camera inches from the course. I positioned the camera at the apex of a right-angle turn. I even took into account that the riders would be leaning into the turn in my direction. Then I backed the camera off about a centimeter more from the curb. Since I was a total novice at this, I asked the race official and police in charge of this turn if I posed any danger to myself or the riders. They assured me that the competitors and drivers of support vehicles did not routinely run over curbs and hence I was good to go.

Although I had viewed photographs and video of prior races and read several articles on photographing bike races, I still encountered a few surprises.

Do Sports Illustrated photographers have to worry about me taking their jobs? A quick look at my photos will reassure them. Can first-timers get interesting shots? You bet. Will I make a more serious effort to photograph future bike races? I’m already researching and planning.