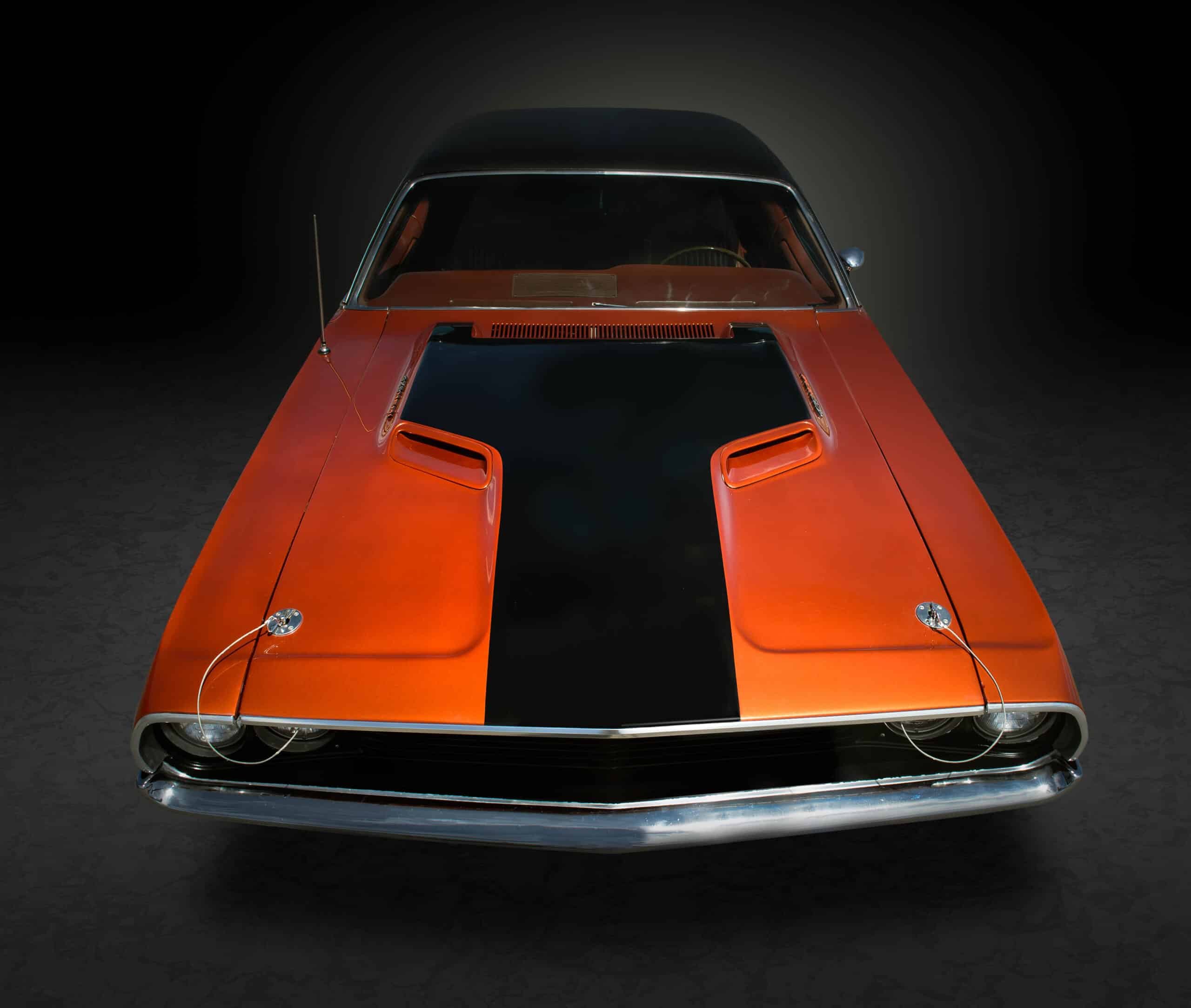 This is the second in a series of articles on “Cars we have photographed and loved.”

In 1970, if you hankered for a luxurious muscle car built to your specifications, Dodge had a solution, the Challenger. Today, if you want a 70s muscle car that is rare (or even unique) and one that you can restore or upgrade, a Challenger can fulfill your dreams.

Where does the Challenger fit in?

The 1970 Challenger was Dodge’s premier entry into the pony-car segment led by Mustang, Camaro, and Barracuda. But the Challenger was marketed as a more luxurious model, like the Mercury Cougar and the Pontiac Firebird. Or, to oversimplify a bit:

Though similar, the Challenger and Barracuda were distinct models. True, they were both built on the Chrysler E-Body platform, they shared drivetrain components and some sheet metal, and they had a similar profile and proportions. But the Challenger was somewhat larger, with a 2-inch longer wheelbase, and a more luxurious interior than the Plymouth Barracuda. Sisters perhaps; twins naaah.

How are Challenger models related?

The Challenger branch of the Chrysler family tree is more complex that those on some long-running soap operas. Let’s see if we can sort it out.

The base model Challenger was available as a 2-door hardtop and convertible. Only 2-door models existed, so I’ll drop that part of the name. The base hardtop could be combined with the performance R/T option, the luxury SE option, or both. That gives us four Challenger hardtop models:

(If you are curious about what the SE and R/T actually added, hang on; we’ll look at them in a bit.)

The base convertible could have the R/T option, but not the SE.

Now we’ll look at how these models differed.

The R/T option added performance features to the base hardtop or convertible. R/T stood for “Road and Track.” It was required if you wanted the most powerful engines, such as the 426 Hemi.

The R/T option upped the base engine to the 330 horsepower 383 and beefed up the suspension and brakes. Over the engine, a Power Bulge hood added dual scoops and was held down with hood pins. The interior gained high-back vinyl bucket seats and the Rallye gauges, including a 150 mph speedometer and an 8000 rpm tach. R/T buyers could choose longitudinal stripes, a “Bumblebee” stripe around the tail, or no stripes at all. R/T badges were mounted on the side front fenders and on the grill.

The SE option added luxury features. SE stood for “Special Edition.” Dodge sometimes called it the “sports hardtop” and advertised it as “for the formal type.”

The most noticeable difference was the vinyl roof with the smaller back window, AKA the “limo window.” Under that roof were a velour headliner and an overhead console with warning lights to remind you to close the door, get fuel, and fasten your seatbelt. The SE option added leather front seats.

SE badging included a triangular emblem on the back side of the roof and the name “Special Edition” on the inside of each door panel.

The T/A model was specially configured to qualify the Challenger to compete in the TransAm racing series. The T/A drew 350 horsepower from the 340 cubic inch engine with the Six-Pack carburetor. Feeding that engine was a forward-facing stand-off scoop built into a special fiberglass hood, a few of which found their way onto other models. Other modifications included dual side exhausts, heavy duty suspension with anti-sway bars, a back-deck “ducktail” spoiler, and different sized front and rear tires.

The Deputy was Challenger’s economy model. It was basic. It came with a black steering wheel, black or white vinyl seats, and a rear window that did not roll down. And if fuel economy, not performance, was your desire, you could get it with a 125 horsepower 198 cubic inch 6 cylinder engine. Guess what? Few were sold. Ironically, the poor sales made the Deputy one of the rarest Challengers and has boosted its value to collectors.

In just its premier year, Dodge made a vast variety of Challengers available, spanning the range from Spartan to luxurious, fuel-sippers to thinly disguised race cars. Whether your goal was the supermarket, the drag strip, or the twistiest road around, Dodge could build you a Challenger to fit.

The Challenger pictured in this article started life as an SE model but was upgraded to an R/T SE Hemi – a process the ancient Romans would have called apotheosis.

The Vehicle Identification Number is JS29N0B112615, which decodes as follows:

B – Manufactured in Hamtramck, Michigan, plant

The odometer showed 00094 miles (151 km) at the time it was owned by Leonard Johnson (ljohnson@jk-cpas.com).

Though striking from any angle, the Challenger’s profile is perhaps the most stunning. A light-catching seam along the side emphasizes the subtle curve rearward of the door.

R/T models sport an emblem to that effect on the grill and front side fenders. Though side stripes were available, the clean sides and color matching Rallye wheels give this example an elegance and sophistication that differentiates the Challenger from its contemporaries.

The emblem for the 426 Hemi engine lies along the sloping side of the scoops. If you have a Hemi engine, you want people to know it. Of course, the sound should be enough.

Pop the pins, swing open the hood, and treat yourself to what looks like acres of automotive engineering. Though low, the engine compartment is wide and deep, allowing room for a range of big-block engines. Even the underside of the hood bespeaks Chrysler’s penchant for under-the-skin engineering.

And then there’s that Hemi engine.

The Hemi demanded hard-core drivers. Upgrading your base V8 to the Hemi added $1,227 to the $2,953 price. You also had to accept only a 6-month warranty, forego air conditioning, pay exorbitantly for insurance (if you could get it), suffer arm cramps from pumping premium gas, and endure the scrutiny of police of all jurisdictions.

Then again, you could just tow it to the drag strip and lay down 14-second quarter-mile times all day long. It was an engine so great it had its own paint color: Hemi Orange.

An SE emblem adorns the rear-side of the vinyl roof.

At the rear, dual exhaust tips protrude through cut-outs in the valance panel.

In the center, between the tail lights is a reversing lamp spelling out “DODGE.”

Though not overly deep, the trunk is broad. And notice the sculptural form of the underside of the trunk lid.

This model has the wood-grain steering wheel and gear-shift knob. The asymmetrical console keeps the focus on the driver.

The SE model also included a velour head liner and an overhead console with warning lights for Door Ajar, Low Fuel, and Seatbelts.

High-back bucket seats came as part of the R/T model. The SE option made the seats leather.

The one-piece door panels were an innovation in 1970. Because there was no sound-deadening material behind the panels, doors were prone to rattle. The script “Special Edition” proclaims that this is an SE model.

The driver’s side door sports a remote-control racing-style side-view mirror.

At the front, a deeply inset grill looks like a hungry mouth. This grill was based on sketches by designer Carl Cameron for the prototype 1966 Dodge Charger. The inset grill holds the Challenger and R/T emblems.

The overall impression is that of a middleweight boxer in top form and wearing a well-cut suit. Flowing lines predominate, inside and out: along the side, across the roof, around the grill and tail, across the dash, and around the windows. But there’s more than meets the eye. Conservative badging and low-profile scoops only hint at the robust drivetrain beneath. Power within elegance.

As with other Chrysler products of the era, the beauty of the Challenger was beneath the surface. The Hemi engine, named for its unusual hemispherical combustion chambers, was already a legend among performance fanatics. The TorqueFlite 3-speed automatic transmission was perfectly designed to handle the 425 horsepower off the crankshaft. Equally rugged rear ends got the power to the rear wheels in a way that wasted little.

The suspension could handle real roads at speed. At the front, independent non-parallel lateral control arms were mated to torsion bar springs and anti-roll bars. The rear featured a live axel on asymmetrical, semi-elliptic leaf springs. All that drive train and suspension are attached to a steel unit body chassis with subframes.

Engineering extended to even small details, like the left-hand threaded lug nuts on the driver’s side.

The bottom line for all that engineering was impressive performance: 0 to 60 in 5.7 seconds and a quarter mile in 13.8 seconds.

By 1970 Chrysler had perfected “checkbox customization.” If you wanted a custom car, you no longer needed to get your hands dirty or scuff you knuckles, you just had to check off options on an order sheet. The Challenger epitomized this trend with a mind-wiping, checkbook-gobbling variety of models and list of options. With so many choices, many Challengers were quite literally unique.

So what were some of those choices?

The Dodge team was managed by Ray Caldwell’s company, Autodynamics, known at the time primarily for manufacturing Formula V cars. The first team car was based on a standard Challenger T/A model right out of a local dealer’s showroom. The 340 cubic inch engine was destroked to 303 to meet the 5-liter engine displacement limit for the series. Still it yielded 460 horsepower, adequate for the car’s 3200 pound weight. Painted “Sublime” and sporting the number 77, the Challenger was driven by Sam Posey, now an occasional guest commentator on NBC Sports coverage of Formula 1 racing.

A later chassis was built for Autodynamics by Dan Gurney’s All American Racers, which built and raced the Barracuda in the same series. It bore the number 76.

The team’s best results were 3rd place finishes at Lime Rock, Road America, and Kent. And a Challenger finished 4th in points in the series.

The example shown here is a Challenger SE upgraded to R/T Hemi specs. The following table describes typical R/T SE models. With so many options and variants, few pure standard models may exist. Take these facts and figures as typical, but not authoritative. The information comes from a variety of sources, mostly reliable. Some are estimates and some are calculations. And, I’m not a perfect typist. So … we can’t guarantee every item. Also keep in mind that the example shown here differed in some minor ways from the standard model.

Where made: Dodge Main at Hamtramck, Michigan, USA

Number made: 37 (with Hemi and TorqueFlite)

Thinking of buying one?

Drivable 1970 Dodge Challengers can be had for prices ranging from $20K for an unrestored base model to $250,000 for a perfect R/T Hemi with original engine and transmission. Whether you want one to drive, to restore, or to show, you can find something.

Base models are the least expensive. Expect to pay more for the SE or R/T package. A 440 Six-Pack engine will increase the price dramatically and the 426 Hemi will send it through the roof. Unusual options, such as the Gator Grain roof, can spike prices too.

Look out for common problems. Drum brakes, never that strong to begin with, may have faded to a mere suggestion. Check for rust everywhere. Probe for rust and repairs along the floor, fenders, quarter panels, windowsills, cowls, and trunk. Also check the seats for cracked vinyl and crumbling foam. Examine the door panels for scratches and for imperfect fit. Keep in mind that replacement parts are available for just about everything on the Challenger.

Check for authenticity: Is the car what it appears to be or has it been upgraded from a less expensive model? Check the VIN and ask lots of questions.