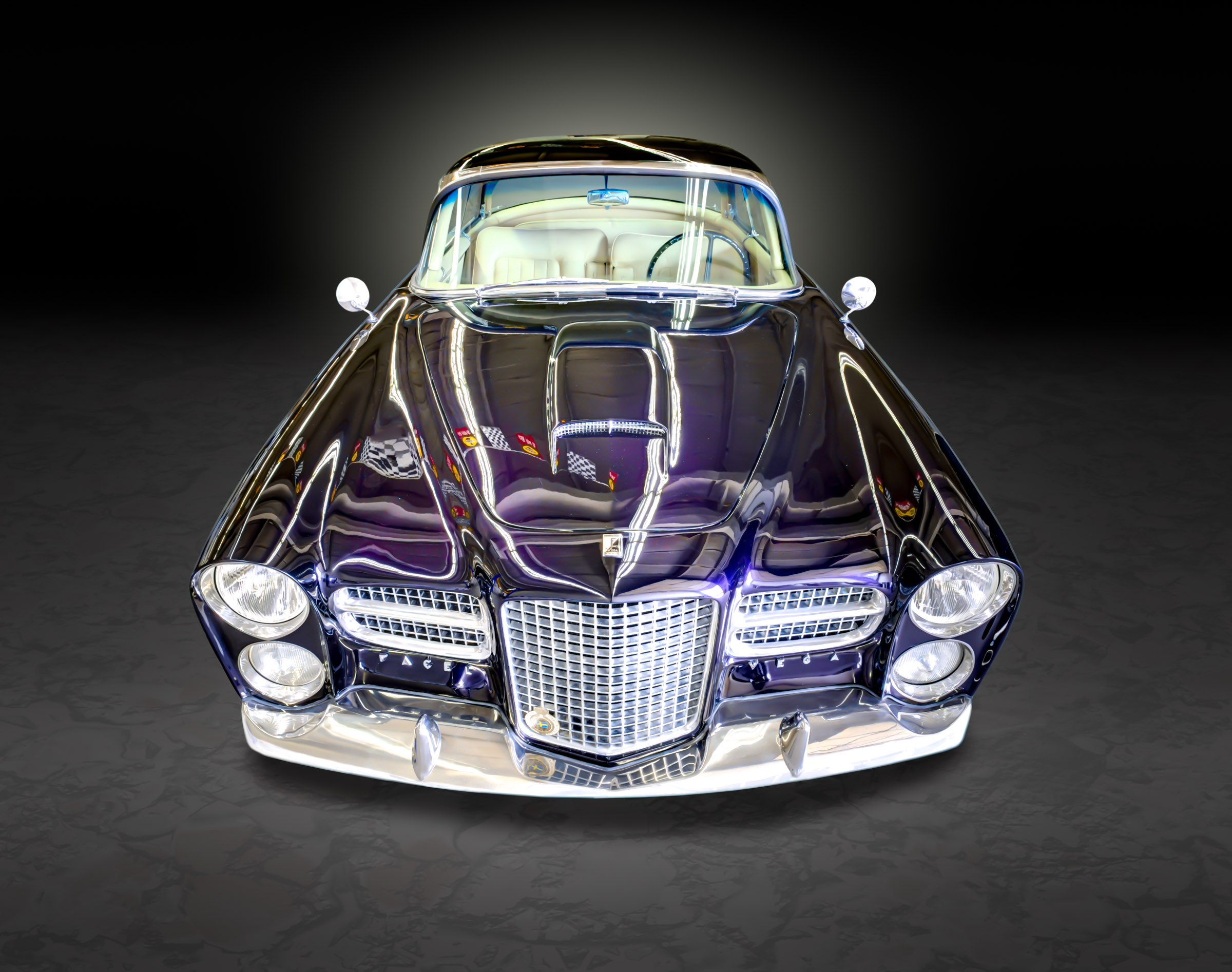 This is the first in a series of articles on “Cars we have photographed and loved.”

Outside Europe and the worldwide community of car aficionados, the 1958 Facel Vega Typhoon is practically unknown. After all, it has been out of production for over 50 years and only a few hundred were ever made. If you love innovative design and automotive history, the Facel Vega is worth getting to know.

This car has had only two previous owners. It was purchased new at Marshall Motors, Inc., in Miami, Florida on January 13, 1958, as a wedding gift for Helen L. Gorman. The second owner was Dr. Jack Widdersheim, a famous doctor from Miami. It has never before been offered to the general public.

Describing this Franco-American collaboration as a French luxury-muscle car is accurate but lacking. Think of it as a cross between a Ferrari and a Rolls-Royce or a Bentley Continental of the mid-1950s. Or, just forget categories and look at the car. You will see the elegance of French style blended with the reliability and power of an American running gear.

Advertising for the Facel Vega said it best: “For the Few Who Own the Finest”. Hand built and priced in the range of a Rolls-Royce, Facels appealed to those with deep pockets and an appetite for speed. Facel owners included the Shah of Iran, the King of Morocco, a host of Saudi princes, a President of Mexico, Ringo Starr, Tony Curtis, Danny Kaye, Joan Fontaine, and Ava Gardner. The make also appealed to race-car drivers such as Sterling Moss and Rob Walker. Albert Camus, as a passenger, died in one.

When Panhard failed to renew its contract, amounting to 70% of FACEL’s auto-body production, Danino decided to manufacture his own cars. Wanting to compete with the likes of Rolls-Royce and Bentley, Danino faced a big problem: The post-war French government had imposed a devastating tax on engines over 2.9 liters (177 cubic inches).

Danino knew he must look beyond France for engines … and for markets. So, years before Caroll Shelby first shoehorned a Ford 289 into a Bristol AC chassis, FACEL grafted Mopar power into its luxury sports coupe. Most Facel automobiles were exported to the rest of Europe and to the United States.

Where does this model fit in?

Named for the brightest star in the constellation of Lyra, the Vega premiered at the 1954 Paris Salon. Early models were known simply as Facel Vega (or FV). In 1956, the name changed to Facel Vega Sport (or just FVS). The name Typhoon referred to models equipped with the Chrysler Hemi V8.

We’ll just refer to it as the 1958 Facel Vega Typhoon.

The Vega was followed by the HK500. And that, by the Vega II. Facel also experimented with two other lines: the Excellence and the Facella.

The example shown here is from the collection of Leonard Johnson (ljohnson@jk-cpas.com) in Colorado. He has done a complete, professional, frame off restoration, no expense spared, to restore the appearance and mechanical systems. Its exterior color is a beautiful deep pomegranate. The interior is done in the finest tan leather and carpet, the VIN is FVS NY254, and the odometer reads 00025. This is the mileage since completion of the restoration which spanned 7 years.

What sets this car apart?

The Facel Vega Typhoon is a balance of strength and elegance—nothing gaudy or frivolous about it. It has a masculine appearance in contrast to the curvaceous Ferraris and Aston Martins of the time. The boxy shape and high sills give this ’50 gem a contemporary feel, like that of a Bentley saloon or Chrysler 300. Its simple lines and uncluttered exterior give it a handsome look that never grows old.

The aggressive stance gives the Vega a look of strength in repose, like that of a great jungle cat poised to spring.

The face of the Vega is definitely “in your face.” The large, three-part, square-grid grill and hood scoop hint at something under the hood that needs lots of air. Stacked round headlights promise distant illumination for a vehicle that is not afraid to drive fast at night. The headlights are on top and auxiliary lights on the bottom.

The lack of a valence panel below the bumper reveals the sophisticated suspension. The entire front end, except for the hood, appears as a single seamless piece of metal. Only down low, between the side grills and the bumper, do we find the brand name. Modesty and self-confidence!

The rear of the Vega continues the design themes of strength and elegance. Smooth surfaces predominate with only minimal interruption. Tasteful fins are capped with tail lights that maintain the side lines. Exhaust tips punctuate the ends of the bumper. And, like the front, the name “Facel Vega” is low, just above the bumper.

Horizontal styling emphasizes speed and form. The side view is dominated by strong horizontal line running uninterrupted from the headlights, all the way back to the tail lights. The front and rear appear to be leaning forward straining to go faster. Stainless, veined rocker panels, along with the front and rear bumpers, accentuate this linearity. In short, the Vega looks as much from the 2010s as from the 1950s.

At the corners are Imperial wire wheels shod with Michelin P205/75R15, ensure that the two-ton vehicle can corner and stop as well as it can accelerate.

A view from the rear shows the attention to curves, especially rounded corners. Note the curve over the roof line, around the rear window, around the trunk, over the tail lights, and along the back of the bumper.

The innovative tail-light assembly shines light in 3 directions. A rear-facing bulb illuminates a translucent red fin embossed with the letter V. The stainless trim over the light preserved the flowing lines of the sill and fenders. All the stainless-steel trim benefitted from Facel’s experience manufacturing office furniture.

In what may be a wink at the American market, the FVS featured stubby fins reminiscent of early ‘50s Cadillacs.

Though of limited production, The Vega’s steel body panels were pressed rather than hand formed.

A wrap-around windshield and pillarless coupe styling gives driver and passengers a panoramic view of the road and scenery.

Facel preserved the integrity of the Vega’s styling by locating the quick-release gas filter cap inside the trunk. Stainless trim extends to even the spare-tire cover.

The interior is sumptuous and functional. The dashboard (fascia) of the Vega resembles that of an advanced aircraft. Large, legible gauges fill the space in front of the driver. Buttons and knobs spill off the dash and onto the console, putting controls ready to hand. The Facel Vega was among the first vehicles to sport a center console and a recessed steering wheel. A map light on a stalk is just another luxury feature. Bucket seats provide a balance of support and comfort.

The back seat is as luxurious as the front. Notice the bucket seats, rather than a flat bench.

Careful design extends to even the door panels, which include a stainless grab handle, a vent-window winder, and switch for the electric window.

[clearboth]Integrated into each door is a storage box with a lid. The storage boxes provide room for incidentals and keeps them close at hand.

Even the head liner is special. A quilted-square pattern of lo-pile fabric harmonizes with the leather surfaces below.

The dash has a tachometer, speedometer, low-fuel and turn-signal indicators, and the push-button selector for the automatic transmission.

Along with the transmission, Facel employed the push-button selector with buttons for Neutral, Drive, Low, and Reverse, but not Park.

In the dash, above the center console, is an instrument cluster with a clock in the center, surrounded by gauges for water temperature, battery charging, gas level, and oil pressure. Below the cluster is an aftermarket stereo. And just below that are levers for heat and air.

In the console is a compartment whose lid is adorned with the Facel Vega applique and the Typhoon emblem.

At first glance, the dash appears to be made of burled walnut. But on a closer inspection you see that it is actually hand painted. It is generally believed that one French worker hand painted every one of these dashes.

The engine compartment reveals what sets the Typhoon apart—a Chrysler Hemi engine—354 CID, producing 325 horsepower with TorqueFlight transmission This view also shows the under-hood lights, quite the innovation in 1958.

Instead of a gaudy statue for a hood ornament, Facel opted for a low-profile enamel insignia, more aerodynamic and more elegant.

If you are thinking about buying one….

Before you plunk down a tall stack of Euros, Dollars, Pounds, or Yen, check for some common and expensive-to-fix problems. A cracked windshield can be nearly impossible to replace. Same goes for damaged exhaust tips. Brakes can stick. As with all rare cars, parts can be hard to come by. One bright spot is the engine, clutch, transmission, and heater, which are pretty standard Chrysler items.