The term “decisive moment” is most often associated with Henri Cartier-Bresson, the patron saint of street photography. It refers to capturing that instant that characterizes a scene or an activity. 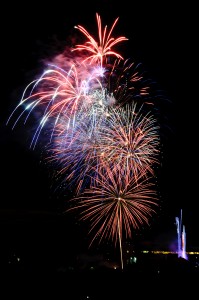 Capturing the decisive moment requires more than a high shutter speed, fast shooting rate, powerful strobe, and video-game reflexes. It requires knowing the decisive moment you want to capture or at least recognizing it among images you captured. For this fireworks display, it was the moment the burst reached its maximum extent but before it began falling apart.

I define it as that instant from which viewers can infer the preceding and following moments. It is the moment that tells the whole story. For example, in sports it is typically the moment the ball crosses the goal line or the puck enters the net. One type of decisive moment is the “pregnant moment,” that is, the instant that a dramatic result becomes inevitable. For example, rather than showing the mountain biker slamming into a slab of sandstone, we show the biker in the air and out of control. The viewer participates in the photo by projecting action forward to its logical conclusion.

Another way to convey a decisive moment is to show human reaction to the event. For example, we show the faces of sports fans as the game is decided, or we show the face of the defendant as the verdict is read.

A little hard to arrange? OK, let’s look for a decisive moment a little closer to home. Your kids are playing toss in the back yard. You start snapping photos-work with me here! When you review the photos you’ve taken, look for one taken a second before the ball is caught or just after it is thrown. Look for the photo that tells the story rather than just records a random moment.