Armed with high-capacity memory cards, we can shoot without guilt. If in doubt take the shot. And with tools like Lightroom and Aperture, it has become practical to review, prune, edit, and catalog hundreds or thousands of images.

This lesson ceased being an abstract principle when this almost-didn’t-take image became an award winner and my best money-maker: 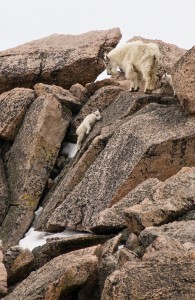 Not only did I almost not take the image, I almost deleted it. I was so focused on making a technically perfect wildlife shot, I couldn’t see what was in front of me—a poignant moment in the life of a mountain goat family. Yes, the mountain goats did not stand out from the background, the focus was a bit soft, and the sky was uninteresting.

Later, I needed a photo to compete in a contest with the theme “bond.” I remembered this image as it did illustrate the bond between mother and child. I adjusted the foreground/background contrast, intensified the sky, and cropped it more tightly to emphasize the verticality of the scene. And guess what? It won first prize in the professional category, appeared in the inaugural issue of Camera Obscura journal, and was made into a poster.

I had suffered from tunnel vision and pixel-peeper anxiety. This latter condition is the fear of criticism by fellow photographers who whine mercilessly about any image that is not perfect in every technical aspect-regardless of what inspirational effect the image may have on others. I now trust my hair-trigger shutter finger and religiously wait at least a month before deleting any image.

Take the shot. Shoot it right. Then shoot it wrong. Shoot horizontal and vertical. Shoot a layout for a magazine cover, for a calendar, and for a poster. Get closer and shoot some more. Back off and show the subject in context. Raise the horizon; lower the horizon; tilt the horizon. Take the shot.