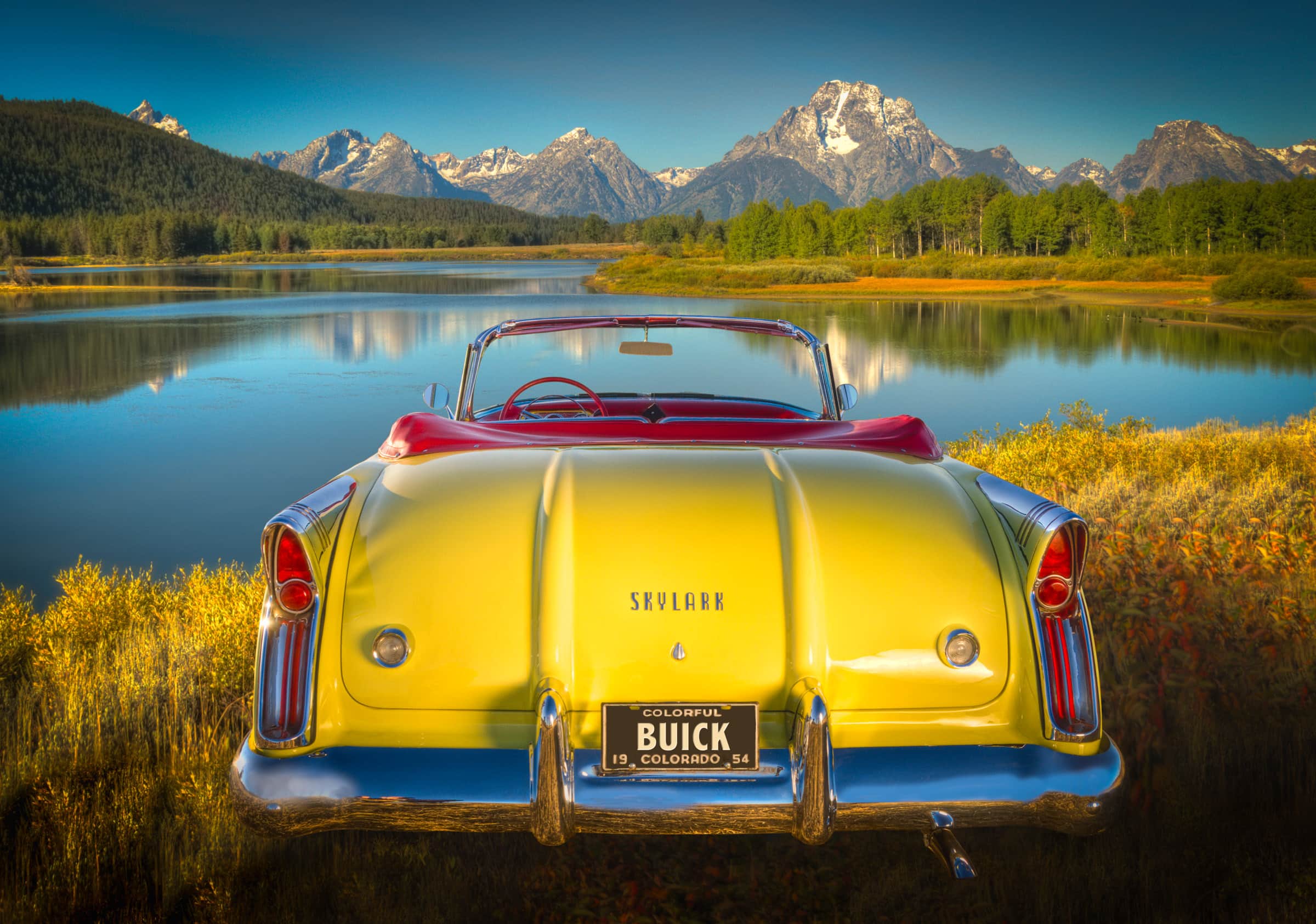 This is the fourth in a series of articles on “Cars we have photographed and loved.”

1954 Buick Skylark Sport Convertible was the Buick Division’s 50th birthday present to itself. Though ostensibly created to compete with Cadillac’s Series 62 convertible, the Buick Skylark served more as a flagship, what today we would call a halo product. And a shiny halo it was. Perfectly restored models have sold for $250,000.

Where does the 1954 Buick Skylark fit in?

For 1954, the Skylark was the “luxury sports car” built on the Buick Century platform. The 1953 version had been built on the Roadmaster platform.

How this model came to be

The Skylark project was initiated by Buick General Manager Ivan Wiles, who liked a customized 1951 roadster created by Styling Chief Ned Nickles. A prototype did the car-show circuit starting in the summer of 1952. From there, progress was rapid. The Skylark went from a 3/8-scale clay model, to a set of blueprints, and on to manufacturing by January of 1953.

The 1953 Buick Skylark appeared in dealer showrooms in the spring of 1953. Though Buick called the Skylark a “sports car,” it was officially a Series 70 Roadmaster—a highly modified and hand-built Roadmaster. The body was chopped 3 inches and the seats lowered so that the seat backs were level with the tops of the doors. Styling came from the XP-300 show car from GM’s Motorama exhibit. The Skylark did get the new Buick V8 engine, just not the supercharged, methanol-fueled one in the XP-300.

Other innovations included a 12-volt electrical system and power brakes, rare even as an option at that time.

As stunning as was its styling and engineering, so too was its price: $5000. That was 40% higher than a top-of-the-line Buick and $1000 more than a Cadillac convertible.

All Skylarks were convertibles except two custom hardtops. Described as a floating greenhouse, the roof did not mesh well with the lowered chassis and no more hardtops were produced.

The 1954 Skylark (the one featured in this article) was, in many ways, a completely new car. Though it contained the same running gear and accessories as the 1953, it was based on a different platform and had radically different styling.

The 1954 Skylark was not built on the top-of-the-line Roadmaster, as was the 1953 Skylark, but on the smaller platform used for the Century and Special models.

In advertising, Buick referred to the 1954 Skylark as a “luxury sports car” and claimed it was “rich with many of the ‘tomorrow’ features of Buick’s experimental car, the Wildcat.”

In addition to the stunning styling, which you can see in this article, the 1954 model included improvements to the engine and suspension. The biggest improvement may have been the price, which dropped $517 to $4483.

With sales of only 483 (half as many units as the 1953 model), the 1954 Skylark cannot be considered a financial success. Three reasons for this failure are price, performance, and prestige. The Skylark cost more than a Cadillac convertible, more than the top-of-the-line Roadmaster’s convertible model, and twice the cost of the Century convertible, though based on a Century platform. The Skylark had the same power as the Century hardtop, which weighed 450 pounds less, and the Century convertible, which weighed 300 pounds less. Many potential buyers perceived the Skylark as a step-down from the top-of-the-line Roadmaster. As a result, status-seekers opted for the Cadillac and penny-pinchers chose the Century or Roadmaster convertible.

Evaluating the 1954 Skylark by units sold would be like evaluating the Mona Lisa by the price Leonardo paid for its paint and canvas. The 1954 Skylark may have been a financial failure but it was a stylistic triumph and an engineering tour-de-force.

The name Skylark was not used again until 1961.

The example here sports a Condor Yellow exterior with a red cloth roof and a Helsinki Red leather interior. At the time, it was owned by Norm Klimek in Colorado. It appeared on the poster for the 33rd Annual Skylark Meet where owners gather to check out each others’ metal.

What sets this model apart?

Buick described the styling of the 1954 Skylark as “flight-designed lines.” The following photos illustrate this design direction:

Color, chrome, and flowing lines combined for an impression of strength and speed, with each component reinforcing the overall appearance. [clearleft]

New for 1954 was the dramatic wrap-around windshield. The face of the dash continued the exterior color, sandwiched between a cap and base of the interior color. [clearright]

One prominent styling cue is the “sweepspear” trim that sweeps back from the front fender, arcs downward across the door, bounces back over the rear wheel, and sweeps to the rear.

The 1954 Skylark features full-wheel cutouts that fully exposes the wire wheels and wide white wall tires. The wheel wells could be ordered in a contrasting color.

An ornate emblem resides on the side just ahead of the rear wheel, in the V of the sweepspear trim.

The next year, this hood ornament spread across the entire Buick line.[clearleft]

The front face is a triumph of Art Deco design. [clearleft]

Most prominent is the name “BUICK” in stylized chrome letters with vertical stripes on the accent color. [clearleft]

Beneath the brand name cascades chrome ribs in the classic waterfall grill. [clearleft]

The headlamp assemblies anchor the front. Critics likened them to pay-for-view telescopes or parking meters. [clearright]

At the back, the styling gets really interesting. Buick described it as the “corsair-sweep of a finned rear deck.” The trunk lid sports twin ridges giving it a barrel shape. Backup lights are also mounted on the rear deck. [clearleft]

The car’s most distinctive feature is the chromed fin. Visible in three directions, it was lifted from the Wildcat II show car. This detail was a favorite of legendary GM designer Harley Earl. [clearright]

Despite the plunging trunk line, space inside the trunk is generous enough for a vertically mounted spare tire. [clearleft]

Though similar to the interior of other Buicks, that of the 1954 Skylark is the best, featuring “soft-tanned choice cowhide.” [clearright]

Chrome bands flow around the base of the front seat and along the sides of the seat backs. [clearleft]

Buick did not skimp on the back seat either. It is roomy and inviting, with grab straps along the backs of the front seats and individual window controls and ash trays on the arm rests. [clearright]

True to its time and mission, the 1954 Buick Skylark was a proud beauty well suited to well-healed extroverts.

The engineering of the Skylark was as advanced as the styling. The engine was light, compact, and powerful for its day. The Fireball V8 weighed just 635 pounds, measured only 26.56 inches wide, and was short enough that Buick could reduce the Roadmaster’s wheelbase by almost 5 inches in 1953.

Cylinders were oversquare, meaning that the bore was larger than the stroke, 4.0 by 3.2 inches respectively. Valves were arranged in a straight line along each bank of cylinders, resulting in the term nailhead. This arrangement of valves and the increased compression ratio required a shaped crown for the pistons. Buick called them Power-Head Pistons.

Coupled to the engine was an equally advanced transmission. Called Twin-Turbine Dynaflow, this 2-speed unit added two turbines to the torque converter sandwiched between the stator and pump. The result was an additional 10% torque, while keeping the legendary smoothness. And customers stopped calling it the “Dynaslush.”

The following table describes the standard 1954 Buick Skylark. The information comes from a variety of sources, mostly reliable. We can’t guarantee every item. Also keep in mind that the example shown here differs in some minor ways from the standard model.

Thinking of buying one?

Though rare, 1954 Buick Skylarks are not impossible to find. They can be pricey, especially if well restored. Expect to pay $100,000 for a completely restored, but not perfect, example. Make sure the side emblems are undamaged. They are almost impossible to find. Maintenance is what you would expect for a mid-50s GM car. The wire wheels do require frequent “tuning” and also require inner tubes for tires.

Here is a portfolio of shots that appeared in this article. To license photographs or purchase prints, contact William Horton Photography at +1.303.545.6964. Or, e-mail william@horton.com.