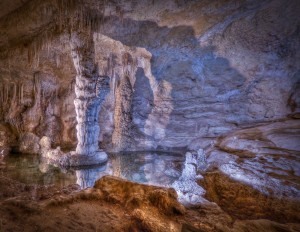 Carlsbad Caverns is mysterious, large, and open to the public. Photographing it has long been one of my goals.

But, I had put off tackling Carlsbad Caverns because, well, photographing caves is hard. However, when I heard that the Park was going to replace the current “theatrical” lighting with more “natural” and energy-efficient lighting, I knew I had to beat that deadline.

Don’t get me wrong. Carlsbad is easier to photograph than many caves, because the publicly accessible parts of the cave are lighted and easily accessed along paved walkways. The challenge for me was how to convey the awe the Caverns had inspired in me as a child.

In this three-part post, come along with me on my photographic mission within the Caverns. In Part I, I’ll share the process of capturing the raw images, in Part II I’ll describe how I created the HRD images, and in Part III I’ll explain how I “polished” these images to reveal the beauty of this remarkable cave. 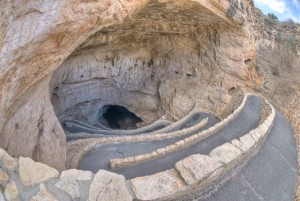 The main challenge in photographing caves is lighting. Here’s a picture of Carlsbad Caverns’ Big Room with natural lighting: 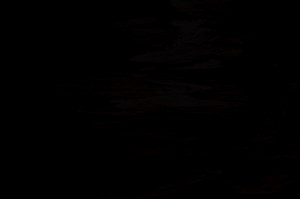 No, this is not a mistake. Except near the entrance, the only natural lighting in caves is no light. Not a glow, not a glimmer, not a lonely wandering photon. The phrase “natural light photography” is an oxymoron when applied to caves. Any light in a cave is artificial.  (OK, OK, some caves, like Lechugilla, do have some faint glow-in-the-dark bacteria.) 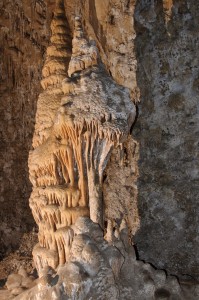 Since the provided light was quite dim overall, you might suggest I use flash, right? I tried that. I was able to wrap some light from a remote Nikon SB-800 Speedlight around some cave features, but I was restricted to those near the sacred path off which photographers and strobe-bearers may not stray. The results were uninspiring; with little light reaching distant walls or ceiling.

The sheer size and depth of the chambers of the cave made flash impractical. To position enough heavy duty strobes would completely block the paths and leave tourists backed up all the way to the Visitor Center.

If I was to avoid the flatness caused by using a flash, I must use a wide-open aperture, a long exposure, a high ISO setting, or some combination thereof. In practical terms, I was limited to a shallow depth of field with a lot of noise. (I knew I should have sprung for that ultra-low-noise sensor on the $5000 D3S.) 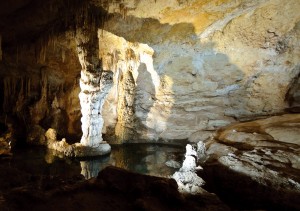 Notice a problem? Right, this image has an extreme contrast range. The areas around the lights are burned out while areas of the subject are still completely dark. So, what else can I do? Sounds like a case for HDR using 7- or 9-exposure brackets.

Here are are the bracketed images for the previous scene. After  reviewing my results, I think seven exposures will capture an adequate range:

As you can see, this example is lighted by a single light source. That is not always the case. Many features are illuminated by multiple light sources with widely different color temperatures. 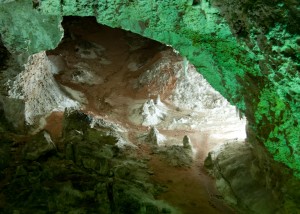 Perhaps you’ve had the problem of photographing a room lit by incandescent bulbs on one side and a north-facing window on the other. The bulbs are orange and the sky is blue. Well multiply that problem by about ten, for Carlsbad Caverns is illuminated by lamps of several different colors, prominent among them being green. Not just fluorescent-tube green. Not just emerald green. I’m talking glowing kryptonite green. Here is an example:

While I’m whining about the lighting, let me add that the lighting was upside down: lights were on the floor, as a result shadows mushroomed up onto the ceiling and dripped down the walls. This “monster lighting” thwarted expectations of the “light from above” (no religious meaning intended) and gave very uneven illumination.

So, I embraced the unique lighting and after about a day of experimenting, reviewing, and revising had a baseline regimen for capturing images:

If you find yourself in a lighted cave, try these settings as a starting point to save time. But experiment too. Maybe you want a darker, moodier, more dramatic look. Or you want to peer into every nook and alcove. The trick is to capture everything you might need to make the images you desire.

In Part II, I will discuss how I developed my bracketed images to build true HDR images of Carlsbad Caverns.